Guess who? It’s Richard Armitage as Guy of Gisborne yet again for a return visit in today’s animated gif. He’s the most sought after character this month!

Our scene selection comes to us from NovemberBride. 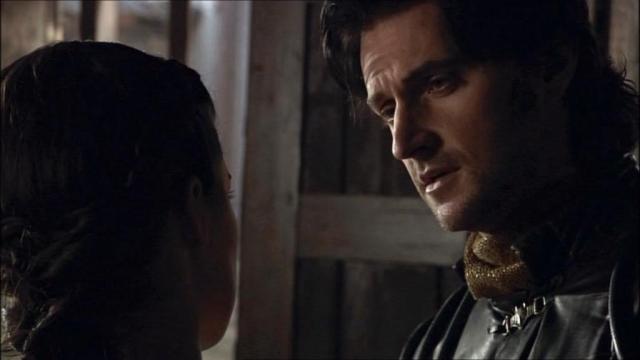 NovemberBride wrote: “Looking at the season 1 episode 13, Marian and Guy are in constant circular motion, he circles around her telling her to be careful who she listens to, etc…. and ends with Guy spinning in a full circle as he sits down and throws his lovely head back with a huge sigh of relief.”

For the caption, our guest designer said, “First song I thought of was Johnny Cash’s ‘Ring of Fire’ … ‘I fell in to a burning ring of fire. I went down, down, down and the flames went higher…’ ”

That scene is truly a visual treat! So I used the latter part with Guy spinning and sitting down and the caption “Ring of Fire.”  Thanks bunches for your fantastic selection and song to play along with it, NovemberBride!

Here is your animated gif:

Let’s face it, Guy of Gisborne is HOT!