Another exciting time of it. Many of us were able to watch the Richard Armitage interviews streaming live online and they are (or were) available for repeat viewing at the Marvel and Livestream sites. Others have posted the videos, but I like to close-caption and transcribe so I am joining the crowd! 🙂

First, here is a screencap of Richard Armitage wearing sunglasses. 😛 It’s a bit fuzzy but for good reason: he was shaking with laughter. Wow, he looked and sounded incredible. I hope this is the first of many Hollywood red carpet appearances. 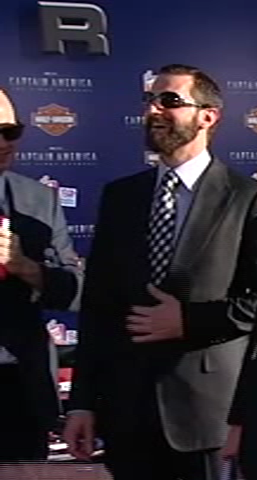 Here is one of the interviews. The transcript is provided by Karyn and is also on RichardArmitageNet.Com. A big thanks to her for her work and her permission to use this transcript! I will try to fill in any blanks, and your input is welcome. It’s difficult to hear with the background noise.

Edit: I still haven’t added closed-captioning to the top video as I’m awaiting input on the unintelligible parts.

Here is the transcript:

M: Hello hello.
RA: Did you want me to sit down?
M: Sure, if you’d like to, I know it’s a long march down that red carpet.
RA: I’d love to sit down…
RA: Ah, that feels good.
M: So, how are you feeling today?
RA: Fine thank you, it’s good to meet you.
M: Good to meet you as well. So what makes someone like you want to be part of a wonderful franchise like this?
RA: Well, you know, I didn’t grow up with comic books, but um, in more recent years I’ve seen most of the Marvel movies and it’s such an honour to be part of the franchise like this. Seeing what they’ve done with this particular story is really exciting, it feels like a (frantic period of WW2) as well. You know, they’ve got a really good mix of… um, action, and… (fantasy mixed in?).
M: You’re known to be a very, very detailed actor. What did you do to help prepare for this film (role?)
RA: I found a novel based on a, it was written by a German called Erich Gimpel. He was one of the last Nazi spies to come to America to try and sabotage the Manhattan project. Visually there was such a great photograph of him. Then we discussed details of him that we could bring to the character so it wasn’t just a part (inaudible). You know, even for myself on set…(inaudible) was happy to have something to really (inaudible).
M: That’s something the fans don’t know, that when you’re on set there’s actually a lot of time to sit around. How did being immersed in the period help you stay in character?
RA: Um… it’s really those things that you do when you’re preparing for the role to try and keep your head inside the world, you really do have to load yourself with all the information. When you’re on set waiting, it’s fine because I love watching the filming, the director (inaudible…) I mean, it’s part of the craft (inaudible).
M: Tell me a little bit about working with the director, Joe Johnston. He’s done so many amazing things (inaudible)
RA: Yeah. He is… he’s very, very detailed, he’s quite amazing because he doesn’t kind of shout, he doesn’t lose his temper, when he’s delivering his notes he’s very, very specific about what he wants, which I respond to (inaudible)
M: Well, thank you so much for talking to us, talking to the fans. Can we give a shout out to our fans?
RA: A shout out?
M: A shout out, yeah.
RA: What’s a shout out?
M: A shout out is when you say, “Hey, and you say your name, and then you say Marvel, your universe right to them because ‘cause they’re watching you live.
RA: Right. Hey. I’m Richard Armitage… Marvel at your universe.
M: Thank you so much, have a wonderful time tonight.
RA: You’re welcome, thank you very much. Bye!

Here’s the second video. It’s easier to understand and I have added the closed captioning. I opened with some music because there was a gentleman talking while RA was waiting in the background laughing and wearing his sunglasses. 🙂 There is some choppiness near the end of the video but that comes from the source.

Reporter: Oh my, look at you. You look so different!

Reporter: All right, so Captain America: The First Avenger. What do you want people to know about this film?

RA: I want people to be inspired by an all-American hero. Something that we’ve grown up with as kids and see it in 3D full glory. Amazing technology happening. And a great performance by Chris Evans who I think is, you know, an inspiration and you want to be him.

Reporter: Amen, absolutely.  And a really nice guy. I spoke to …

RA: Yeah a really good guy. And really really did…really played that part. He did most of his own stunts. It’s astonishing. I saw him on top of a taxi that I was riding in…yeah, he’s a great guy.

Reporter: So I keep saying, “God bless America” although I am British and my family’s from the Middle East and I have people all over Europe.  So this isn’t just an American film.  As someone  who’s British I take it, talk to me a bit about that and the international appeal of Captain America.

RA: Well it did surprise me that it was being shot in the UK because I would’ve imagined that this type of film would be shot here, but I’m really honored to have been part of it. It was probably a 50/50 mix of Americans and British people. And I think that we grew up with much less aspirational comic books than Marvel comics. They were there but we didn’t have them so I think there’s a real discovery happening in England and in Europe with Marvel movies.

Reporter: Some major super-hero films to watch right now. All right. Mr. Armitage, we have now passed the Duke and Duchess of Cambridge getting married. England has a huge thing coming up in a year.  Have you purchased your Olympic tickets? Will you? And what do you think about what’s about to go down in the United Kingdom?

RA: I do think it’s great for London. Unfortunately, I’m not going to be there. I’m going to be on the other side of the …. The city is being transformed so it’s very very exciting.

Reporter: Thank you so much for your time.

Reporter: Congratulations on everything.

RA: Nice to meet you.

RA: Thanks for having me.

Reporter: All right, we’re going to now take a look at the carpet, see who we have next. I see the director down the way.

By the way, I tweeted the reporter a question for Richard Armitage. She read my question on film but did not ask him the question, LOL! I don’t mind, but I wish she asked something more interesting than that question about the Olympics.

Here’s the sound clip of the reporter reading my question:

And here’s a transcript of what the reporter is saying.

Reporter: All right taking a look now at some of our twitter questions.  Bccmee wanted to know what British actor Richard Armitage, uh, how he’s going to celebrate his birthday next month.  I love the question. If I get  him back again I’ll be sure to ask him. You should know that he will not be attending the Olympics. He will be in New Zealand shooting.  And now I’m looking forward to more questions. Please feel free to hook me up. We’re looking forward to everything everybody has to say.  I love these questions. They’re rather amazing.

What will surprise us next? 🙂 Perhaps some more red carpet interviews will emerge too…fingers crossed!